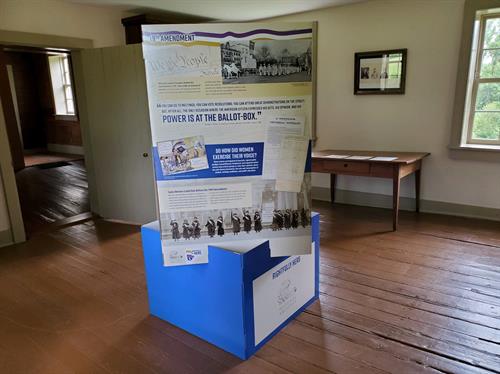 The Douglass-Clark House hosts a new pop-up exhibition from the National Archives, Rightfully Hers, commemorating the 100th anniversary of the ratification of the 19th Amendment. Rightfully Hers contains simple messages exploring the history of the ratification of the 19th amendment, women’s voting rights before and after the 19th, and its impact today. Despite decades of marches, petitions, and public debate to enshrine a woman’s right to vote in the constitution, the 19th Amendment – while an enormous milestone – did not grant voting rights for all. The challenges of its passage reverberate to the ongoing fight for gender equity today. This exhibit runs through Saturday, December 19, 2020 and is free to view.

Due to Covid-19, the Douglass-Clark House is currently limiting guests in the house to 2 persons at a time.

Rightfully Hers is organized by the National Archives and Records Administration. In celebration of the 100th anniversary of the 19th Amendment, the National Archives has launched a nationwide initiative and major exhibition that explores the generations-long fight for universal woman suffrage. The exhibition is presented in part by the Women’s Suffrage Centennial Commission and the National Archives Foundation through the generous support of Unilever, Pivotal Ventures, Carl M. Freeman Foundation in honor of Virginia Allen Freeman, AARP, and Denise Gwyn Ferguson.